SFERMION RESEARCH - Bitchcoin: The Mother of the Modern NFT 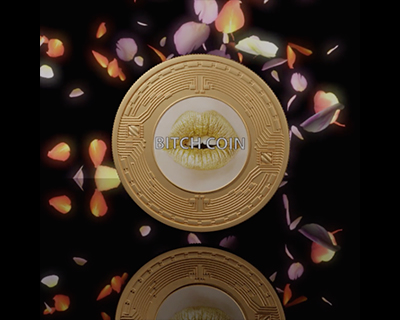 Bitchcoin: The Mother of the Modern NFT

In 2014, Sarah Meyohas was an up-and-coming artist looking to carve out a niche for herself in the art world using her experience in finance and combining it with the major emerging trends at the time: the financialization of the art world, the emergence of the “influencer” as a personal brand, and the rise of Bitcoin and blockchain technology. This (at the time) unexpected matrimony between art, finance, the “influencer”, and blockchain led to Sarah creating and launching Bitchcoin in February of 2015. Bitchcoin is considered a “proto-NFT,” a play on the word prototype because its creation predates the launch of the Ethereum network as well as all other NFTs and set the stage for the current ecosystem before the terms “NFT” and “metaverse” even existed.

Bitchcoin’s inception occurred in a pink shipping container with the interior covered in reflective mylar - a fitting setting for such a unique concept at the time. The shipping container held the Bitchcoin miner that pre-minted the original Bitchcoin tokens on its own native blockchain, and each token was backed by Meyohas’ physical photography at a fixed rate of 25 square inches of print per Bitchcoin. Meyohas created a collection called Speculations to be the initial backing for Bitchcoin while also offering token holders the opportunity to hold their tokens and exchange them for her future work, essentially creating the first social token where collectors could invest in the future of an artist or influencer.

After releasing Bitchcoin to the world, Meyohas shifted her focus to creating physical artwork related to the concept of value as a continuation of the Bitchcoin experiment. In 2017, she released her largest project called Cloud of Petals. In this physical performance piece, Meyohas employed 16 men to hand-pick and photograph 100,000 rose petals. Using AI technology, the rose petal photographs were used to generate new rose petal images that were displayed in a gallery exhibition with VR features. Meyohas asked the 16 men photographing the rose petals to choose one petal from each single rose that was most beautiful to them. At the end of the exercise, Meyohas was left with 3,291 rose petals as relics of the performance.

The Cloud of Petals performance marks a significant moment in Bitchcoin’s history because it is now the work that backs Bitchcoin. The hand-picking and photography of the rose petals reflects analog proof-of-work due to the manual labor that went into the process, and the men picking their favorite petals from each rose ties human subjectivity into the performance relics as well, adding another dimension to the concept of value in the artwork. Because of this, just as Meyohas felt it apt to originally back the collection with the artwork titled Speculations, she ultimately decided it was most appropriate to back each Bitchcoin with a rose petal from the Cloud of Petals performance after migrating the collection from its native blockchain to Ethereum.

The migration of Bitchcoin to Ethereum mainnet occurred in mid-2021 with a total supply of 3,291 reserved tokens backed by each of the 3,291 rose petals from Cloud of Petals. The majority of the tokens were already accounted for from holders prior to the migration, and 480 tokens were sold via a dedicated auction sale in collaboration with Phillips for a total of $399,900. The new Bitchcoin tokens are primarily traded on Opensea. At the time of writing (March 16, 2022), there are 269 unique owners of Bitchcoin, and the token has a floor price of 1.95 ether with 969 ether in volume traded since the collection’s migration to Ethereum.

Of the 269 unique owners, the top 40 wallet addresses with the most tokens hold a combined 2,844 Bitchcoins representing a little over 86% of the full collection. The wallet with the most holdings belongs to Sarah Meyohas herself, and it accounts for about 42% of the total supply of Bitchcoin with 1,393 tokens. There is a steep dropoff between her wallet as the top address and the address with the second-highest holdings which accounts for 163 tokens, or just shy of 5% of the total supply.

Although Meyohas holding a majority of the supply herself may seem alarming, she is responsibly managing the available supply on the market based on available liquidity. At the time of writing, she has 5 tokens available for sale out of a total of 36 Bitchcoins available on the secondary market, giving the collection a listed ratio (listed amount/collection size) of just under 0.011, or 1.1% of the supply. Based on the data shown in the above chart, this figure is exceptionally small compared to other collections and demonstrates her discipline and sense of responsibility as the custodian of the collection.

The above graph illustrates the sales history of Bitchcoin since its migration to Ethereum (minus OTC trades) in mid-2021. The collection initially did not garner much traction, but there was a spike in volume and price during August when Bitchcoin sales reached a high of 4.5 ether before cooling off, very much in line with the overall NFT market. The highest concentration of sales happened during August, and the majority of Bitchcoin sales have been in the 1 to 2 ether range.

Comparing Bitchcoin holders to other blue-chip NFT collections reveals overlaps in the respective communities. Of the 3,291 total Bitchcoins, the Cryptopunks community accounts for the most out of all the major blue-chip NFT collections with 274 Bitchcoins being held by 15 Cryptopunks holders. Mutant Ape Yacht Club follows up as a close second with 242 Bitchcoins being accounted for by 14 MAYC holders. Meebits is the collection with the most unique wallets that also hold Bitchcoin, with 31 Meebits holders accounting for 199 Bitchcoins.

Bitchcoin’s inherent value stems from it being the first on-chain tokenization of artwork, hence the fitting moniker of “proto-NFT.” Similar to traditional physical collectibles such as trading cards, vinyls, or cars, historical significance plays a role in the value of NFTs due to the collector appeal as well as the speculative potential. Being the first backed tokenization of art also incorporates the limitations of physical artwork. Unlike previous digital artwork in which artists would release open editions of the same piece, Bitchcoin flipped the script and made each digital asset truly unique and verifiably scarce due to its physical counterpart, enhancing the value creation of physical art by bridging it into the web3 ecosystem. Another value driver for Bitchcoin is Meyohas’ existing impact within the art industry as well as her future potential. Bitchcoin collectors hold the token with an expectation that Meyohas will continue to deliver exceptional artwork to the world which will grow her brand and community and generate more demand for her earlier innovative work.

When Meyohas released the original collection in 2015, blockchain technology had been known to be the most verifiable source of truth without a centralized authority. Meyohas expanded on this concept by essentially attaching vouchers for her physical artwork to the fungible Bitchcoin tokens, laying the foundation for the modern NFT via the eventual introduction of on-chain media and paving the way for the future of digital ownership. Although there may be concerns around the ownership concentration with Meyohas holding a majority of the supply, she serves as an ideal custodian because her actions demonstrate that she is cognizant of the impact she has on the market and is responsibly managing the available supply. Meyohas’ offering of Bitchcoin to the world marked a revolutionary financial innovation by introducing ownership to digital artwork and creating a link between physical and digital assets, ultimately delivering verifiable value to digital artwork and birthing the NFT market as we know it today.